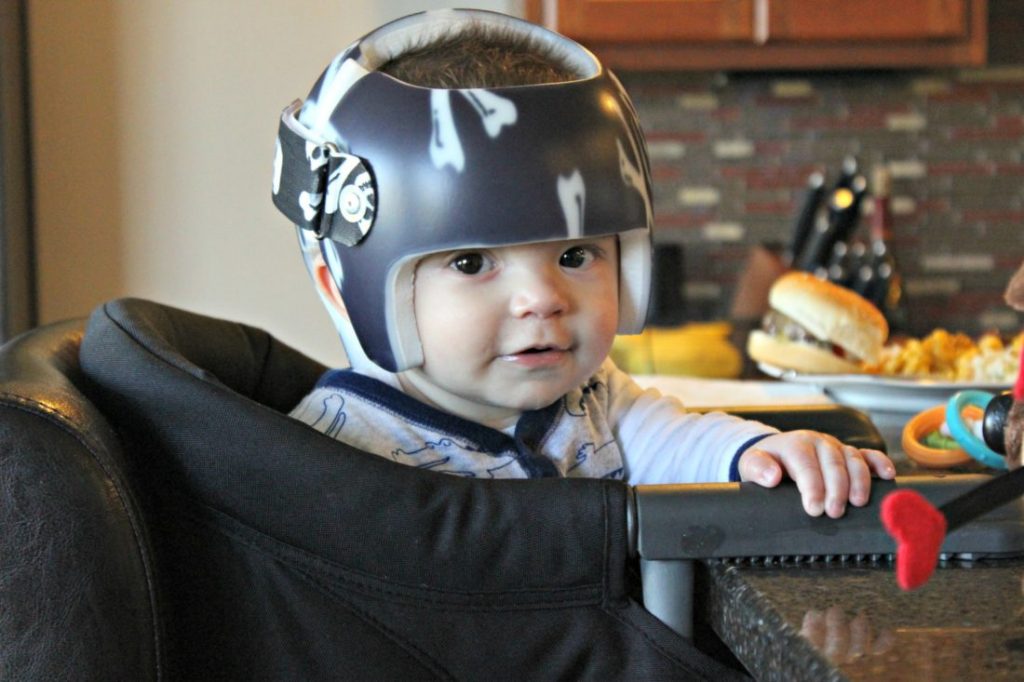 What’s up with the Helmet?

Hi friends. 🙂 Let me start out by saying that Helmet Head has taken on a whole new meaning in our house! Bode has been sporting a new look lately–part football player, part biker baby. I am sure there is some medical jargon for it but in layman’s terms, Bode has a flat spot on the back of his head. The helmet is supposed to help shape his head. Has anyone else’s child had to wear one?

We had noticed the back of his head was a little flat but thought it was somewhat normal. At his four-month appointment we brought it up to his pediatrician. She said that with time it would likely round on it’s own but if not a helmet may be a possibility. She gave us instructions to keep him off of his back as much as possible and asked us to come back in a month so she could check it. Sounds easy, but babies are on their backs a lot–sleep, naps, swings, play yards, etc. You can only do so much tummy time in one day. Thankfully around that time, he was transitioning into using an exersaucer and sitting more upright instead of laying flat in his rock n’ play. When she first gave me these instructions I felt a little zinger of mom guilt that I had him on his back too much. She must have seen it in my eyes because she was quick to make me feel better. She said sometimes, no matter what you do, some kids are just pre-dispositioned to have a flat area on their head. Plus, we had a vacuum assisted delivery which doesn’t help head shape matters.

We tried like hell to keep him off of his back but at his follow-up appointment the back of his head was still pretty flat. She recommended that we schedule a consultation with Midwest Orthotics to discuss the possibility of a cranial molding helmet. This didn’t surprise us nor were we upset, it was more like let’s get the ball rolling ASAP if he needs it.

At his appointment at Midwest Orthotics they did a scan with a camera and measured his head shape from front to back and side to side. I am sure there were some other measurements in there too. Basically, they take the scan, the computer does it’s thing, and you are given a percentage. Bode’s results were two standard deviations away from the mean which put him into ‘highly recommended’ helmet category. Ruh-roh! Check out the funny little hat and stickers he had to wear–I think he looks pretty cute. 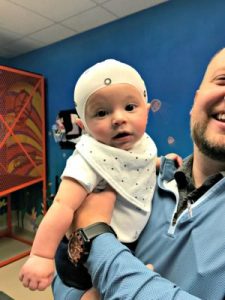 We ordered his helmet at the consult so he could get started right away. They have a ton of patterns to choose from–we went with a skull and crossbones because what else screams ‘bad ass’ like that. The orthotist said it is very likely he will have good results with the molding helmet because he is so young. His head is still soft and very malleable. We are hoping that he will only have to be in it for 3-6 months. Thankfully this is just a cosmetic issue.

We are about a week and a half in and Bode has adapted great. We adjusted him to it over six or seven days, increasing the amount of time he wears it each day by a few hours at a time. Now he is wearing it pretty much 24/7. He has to be in it all the time with the exception of an hour or so each day. He will go once a month to get his head rescanned to track progress.

Maintenance is pretty easy–you swab the inside of it with rubbing alcohol and let it dry. Once it’s dry you wash it with baby shampoo, rinse, and let it dry again. I was washing his hair every other day but have started washing it daily. His head does get super sweaty in it but his body should adjust to that anytime now.

I definitely think it’s harder on the parents than it is the kids. No parent wants to have their kid stuck in a helmet all day. We take on their pain, although I am pretty confident it doesn’t bother Bode at all. Plus, kids Bode’s age have no idea that they look different from other kids. I think adults are much more aware of this. To be honest, I felt a little shy about taking him out in public the first few times. I kept worrying about what other people would think which is so silly. Our first day out of the house I took him to music class which is a super safe place—we have a ton of friends in class and the teacher is great. Since then I have been out and about with him a lot. I feel compelled to explain the helmet to people although I know it’s not necessary. I am not sure if that feeling will go away or not. I know the helmet is just a blip on the radar in the grand scheme of his life. Who would have ever thought such a thing was even possible?! I am thankful that a simple fix can solve the problem.

Every day of parenting brings it’s own new experiences, challenges, and joys. It’s a roller coaster of the best kind.

Here are some pics of our cutie in his helmet: 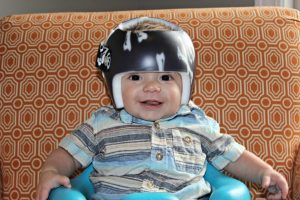 Doesn’t seem to affect his play… 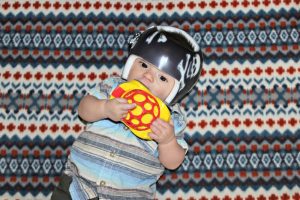 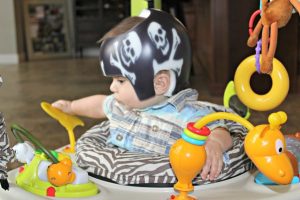 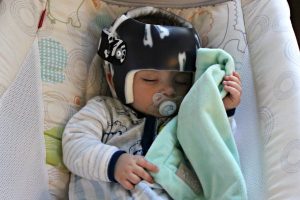 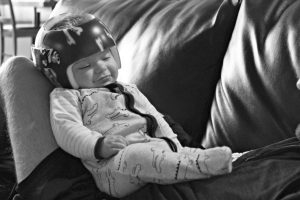 Meanwhile, we have a big ol’ baby who wants some attention too… 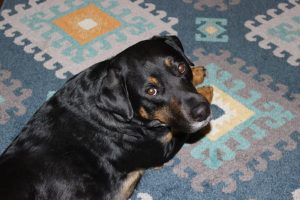 If you have any helmet experience or advice please comment below! 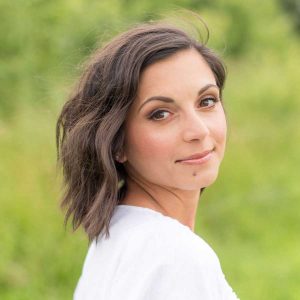 PrevPreviousMy Favorite Packaged Treats
NextHow to Fuel Yourself on the TrailNext 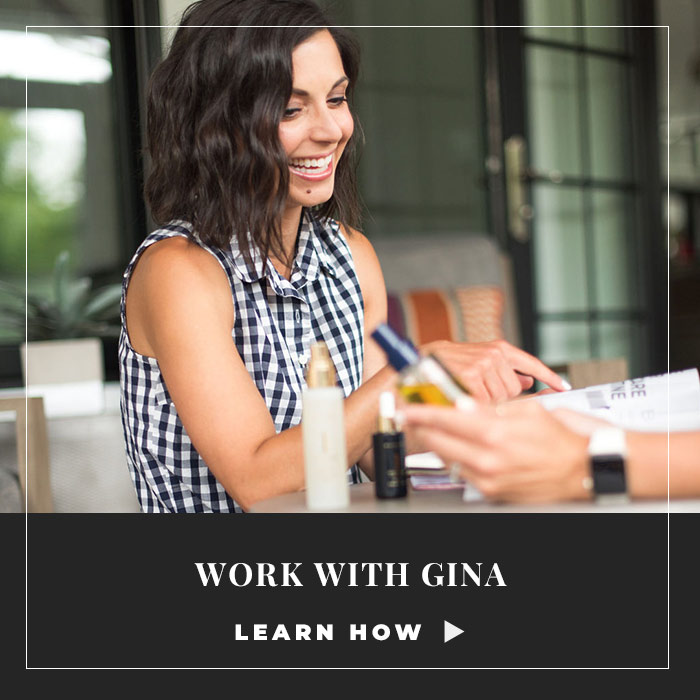 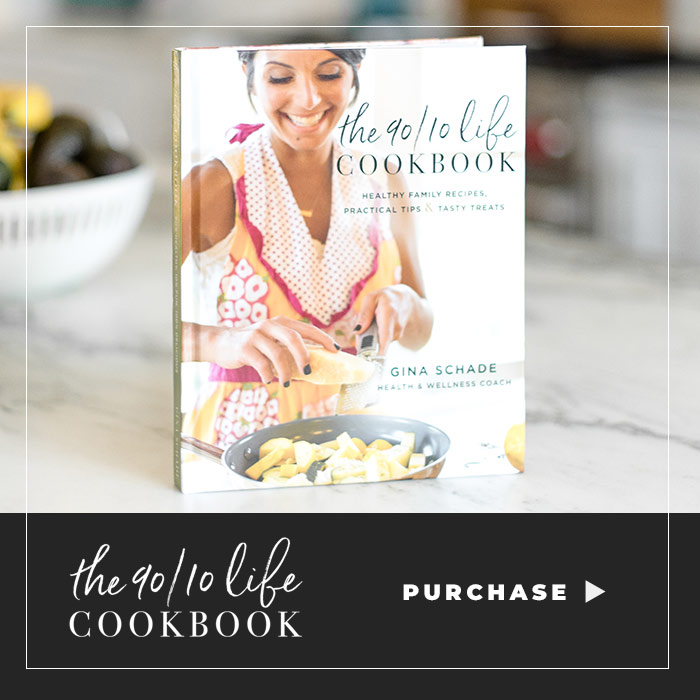 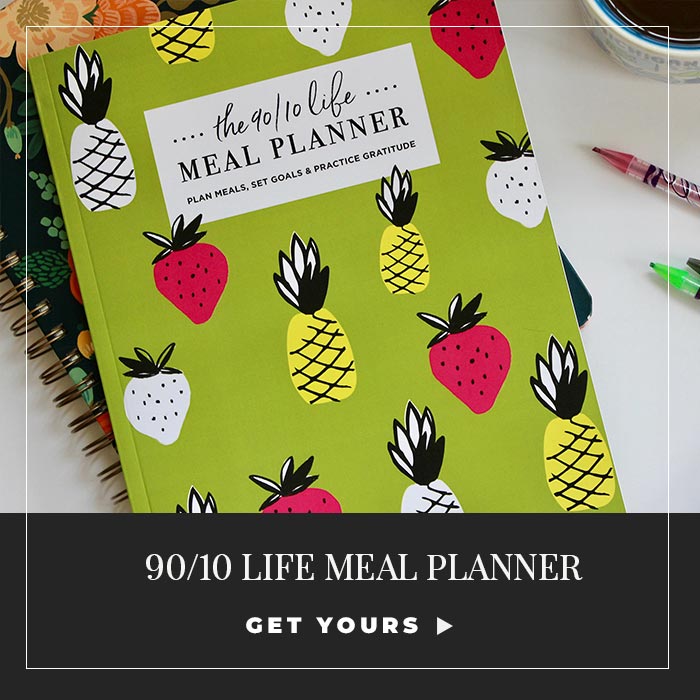 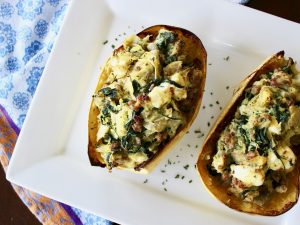 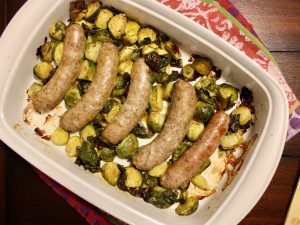 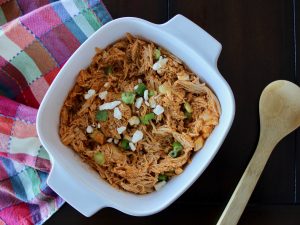